How can we ensure that Counter Fraud Investigators are competent and able to conduct investigations with integrity and credibility?

WEBINAR, TUES NOV 16th 2021: How can we ensure that Counter Fraud investigators are competent & able to conduct investigations with integrity & credibility?

How can we ensure that Counter Fraud Investigators are competent and able to conduct investigations with integrity and credibility?

About the blog writer: Ralph Cockburn – Senior Counter Fraud Trainer. Ralph has spent the best part of 40 years as an investigator in both the public and private sector, he has a wealth of counter fraud experience. His early years were spent as a young constable then a detective in Strathclyde police; here he gained considerable experience investigating major crimes, including a 2-year period seconded to the forces Cheque & Credit Card fraud squad. Prior to joining Intelligencia, Ralph managed the AXA Insurance Field Investigation Team for a number of years, he is immensely proud that his team attained the British Standard for Professional Investigation, BS10200, in 2016 and have retained the standard every year since. His thirst for lifelong learning and continuous personal development has driven Ralph to achieve various qualifications over the past 6 years including, Accredited Counter Fraud Specialist, a Master’s Degree in Counter Fraud and Counter Corruption and a Level 5 Diploma in Management and Leadership.

Welcome to the first in a series of ‘How Can We?’ blogs, where we will be looking at the Counter Fraud sector. We’re starting off the series by looking at, ‘How can we ensure that Counter Fraud Investigators are competent and able to conduct investigations with integrity and credibility?’.

If this blog is of interest and you would like to know more, l will be presenting a live webinar on Tuesday 16th November between 11am and 11.30am. You can register by clicking on the link below. I hope to see as many of you there as possible.

REGISTER FOR THE WEBINAR

In May 2001 the Private Security Industry received Royal Assent. This created a mandate for the creation of The Security Industry Authority (SIA), as the regulating body under the Home Office, to issue individual licenses to the wider security industry.  Investigation in the private sector was included but has yet to be implemented.

There has been some debate as to whether in house investigators would require to be licensed, but for me this is a moot point. The purpose of licensing was to create enhanced protection of the public through increased trust and confidence in the investigator by reducing criminality, setting and maintaining standards of probity, and improving the professionalism of all who work in the industry. It also aspired to the creation of a framework for developing, promoting and spreading best practice.

Will a magistrate, a district judge or a high court judge consider whether an investigator is a sole trader or employed by an insurance company when they make judgement on a tribunal, civil hearing or criminal trial?

Neither the member of public under investigation, nor the court, should expect a lower standard of investigation dependent on the sector or industry the investigator works in; potentially their privacy could have been unlawfully invaded, or evidence which could prove their innocence could have been suppressed or hidden. A bad investigation by an incompetent investigator can lead to their business being ruined or can cause severe reputational damage to the global commercial organisation they work for. As it’s an ongoing investigation I won’t go into any detail, but if anyone is in any doubt as to what reputational and financial damage can be done to an organisation, I would urge you to research the “Horizon Scandal,” involving scores of Post Office sub post masters and mistresses.

We have a duty to ourselves, our employees, our investigators, our customers and to society to ensure that individuals who delve into the personal lives of others do it lawfully, transparently and with credibility.

It should not matter whether the investigation is civil, criminal, regulatory, internal or for intelligence purposes, every individual involved in investigation activities should be aware of, and adhere to, legislations and regulations where legally bound to do so. Where they are not, they should be adhering to the spirit of these laws and regulations. Legislation such as the CPIA, RIPA, Human Rights Act and Data Protection laws ensure that investigations are conducted ethically and that information obtained is lawful, proportionate, appropriate and fair.

The Security Industry Authority Act defines regulated activities as any surveillance, inquiries or investigations that are carried out for the purpose of:

In 2011, enquiries led by Keith Vaz and Lord Justice Levenson again turned the spotlight on investigative practices in the private sector. Both enquiries made recommendation regarding licensing, which was endorsed by the then Home Secretary in 2013, highlighting once again that a critical requirement for an investigation practitioner was to, “Have sufficient training and hold the approved qualifications”.

It is difficult to understand why investigators in all sectors and industries would not have a requirement to have sufficient training and hold approved qualifications. The minimum qualification required is likely to be a Level 3 Award for Professional Investigators (QCF). In addition, the British Standard Institution code of practice for the provision of investigative services, published in September 2013 (BS102000)10 and revised in 2018, provides a clearly defined standard for non-public sector investigation businesses to adhere to. Part of the standard is the requirement that all investigators have the minimum level qualification and have undergone a criminal records check.

In the UK we have a colossal problem with fraud, the police do not have the capability in terms of numbers of officers or trained fraud investigators. Someone has to investigate these if we are going to address the problem head on, and to do so we need trained and competent investigators who are capable of conducting lawful investigations which will have a high chance of success when presented to decision makers or prosecuting bodies.

Organisations readily accept that fraud is such a problem, but they can’t take a Fraud Investigator off the shelf and put them into play. It takes time, training and developing staff. Having well rounded knowledge on legislation and governance must be a given for investigators and what we are noticing is minimal expectations are sometimes not there. This allows us to impart the knowledge that a qualified investigator should be expected to have been held a lot earlier in the career of such an important role. Private prosecutions are conducted to criminal standards and investigators must conduct investigations to same standard.

So, while there is no requirement for investigation staff to have any knowledge of the legislation, regulations, ethics governing lawful investigations, and individuals do not need to hold a minimum standard of qualification or have a criminal record check, would you be happy letting such an individual loose on your customers or members of the public?

Owners, shareholders and customers demand that businesses such as banks, insurers, retailers, gambling companies etc. are run ethically and with integrity. In addition, reputational damage should be high on their risk radar if investigators within these industries are not conducting investigations to the same level as law enforcement officers or investigators in the public sector.

On 1st November 2015 investigative activities became licensable in the Republic of Ireland, it mirrors the requirements of the SIA and is being closely watched by the British Government. Licensing may or may not follow. In house investigators may or may not be required to be licensed, but we can ensure that Counter Fraud Investigators are competent and able to conduct investigations with integrity and credibility by giving them the tools of the trade and the knowledge, skills and behaviours to demonstrate a high degree of professionalism, trust and confidence in the individual and the organisation.

We must also consider what effect Covid has had in that a large percentage of Investigators working from home, now work in isolation, reducing the opportunities for them to interact, collaborate and learn from their peers and line managers. Continuous personal and professional development is key, particularly in the world of fraud where the bubble is squeezed in one area and pops out somewhere else. Fraud evolves at an incredible pace, so it’s important to share ideas and experiences across a broad spectrum of sectors, businesses, and organisations – who knew 10 years ago that we would be investigating fraud involving Non-Fungible Tokens!

I really do hope that you have enjoyed reading my first blog and discovered something new about the world of counter fraud. If you would like to know more, you can follow the Intelligencia Training ‘How Can We?’ series of blogs and webinars. Please click on the link below and we will be delighted to add you to the blog distribution list and guest list for future webinars. 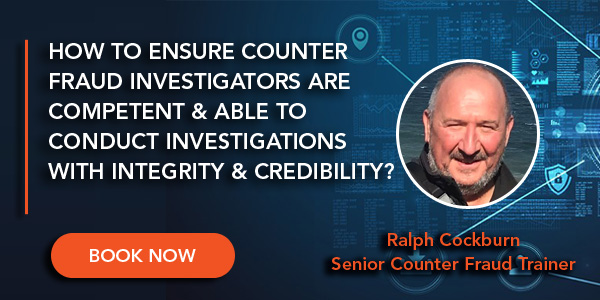